Nothing About Trees review 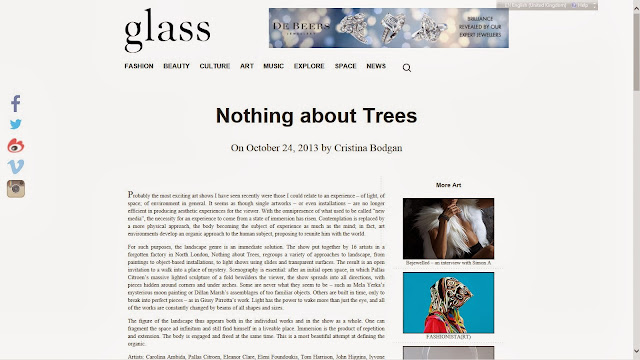 Posted by Eleanor Clare at 11:35 No comments:

Posted by Eleanor Clare at 11:30 No comments:

Watch this virtual tour of the show on Vimeo


Nothing About Trees Group Show, London, October 2013 from Kam Wan on Vimeo.
Posted by Eleanor Clare at 06:37 No comments:


Tillman: “We have all sorts of feelings about trees that have nothing to do with trees"
Stockholder:   “They have to do with us”

London was always a magical place of secrets, of dark alleys, of hidden entrances, an inspirational place of exotic and elusive shadows.

But the secret places and spaces that gave London its intoxicating, clandestine charm are being lost, so where now can we find the spaces in which we dream, create, exist?

15 artists have taken temporary possession of a forgotten former munitions factory in North London.  In this black and theatrical realm a chemistry occurs; a juxtaposition of art and interior.  Darkly imposing, the building itself is the dramatic backdrop in which the work appears and is observed.  The synthesis provokes allegory and allusion - an evocation of theatre and cinema as much as an exhibition.  To move through this melodrama is to go on a metaphorical journey.

This is a world of smudged boundaries…...a forgotten piece of the city opened up, energised, but ephemeral and transitory, a secret place.
Posted by Unknown at 12:27 No comments:

We are grateful to Bergen Kommune for supporting the international scope of this exhibition.